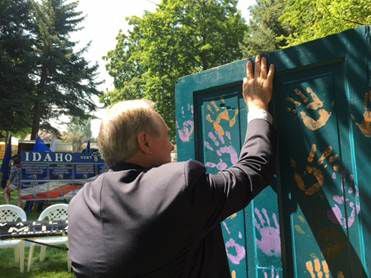 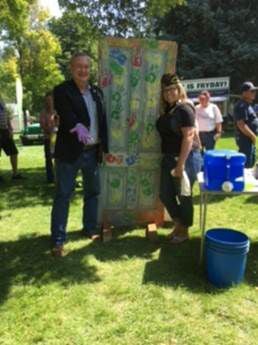 at an August 2017 event in Jerome, Idaho, to honor Vietnam Veterans)

at an August 2017 event in Jerome, Idaho, to honor Vietnam Veterans)

Last summer, I had the opportunity to place my handprint on the civilian side of a door Melanie Foster, Jr. Vice Commander for the Department of Idaho Veterans of Foreign Wars (VFW), takes to veterans events.  She helps raise awareness about suicide prevention, posttraumatic stress disorder (PTSD) and traumatic brain injuries.  Veterans have placed handprints on one side of the door, while families, friends and veteran advocates have signed the other side.  As we recognize September as Suicide Prevention Month, I am reminded of the door’s message of our role as a community to keep the door open with support, encouragement and outstanding services that support return to civilian life.

Melanie said, “The door originally started as a fun project to share with the public, but it became a much deeper project than that.  As each piece of it came together, I found myself in it—a soldier who felt alone and stuck.  The veteran’s side of the door does not have a handle or knocker on it, but the civilian side does.  Veterans cannot get out of where they are without help from their side as well as the civilian side.”

Suicide’s impacts are certainly widespread beyond veterans and servicemembers, but high rates among veterans have been reported.  The U.S. Department of Veterans Affairs’ (VA) veteran suicide rate for Idaho exceeds both national and Western Region rates.  This follows the VA’s report last fall that the highest rates are in Western states.

In October, I joined a bipartisan group of senators in reaching out to the VA to stress our commitment to working with the VA to expand suicide prevention efforts for Western state veterans.  We also recognized the suicide prevention and mental health services the VA is providing.

Help can be accessed at www.veteranscrisisline.net/BeThere.aspx.  The VA’s Veterans Crisis Line (1-800-273-8255) can also be accessed via online chat at VeteransCrisisLine.net/Chat or text to 838255.  The Idaho Department of Health and Welfare provides resource information, at http://healthandwelfare.idaho.gov/Families/SuicidePrevention/Resources/tabid/1920/Default.aspx.

Work continues to ensure veterans have timely access to high-quality services.  In June, improvements I authored were signed into law that will help make understanding and navigating health care options both inside and outside the VA more straightforward for veterans.  In July, I introduced legislation to improve the federal program that helps servicemembers transition from military service back to civilian life.