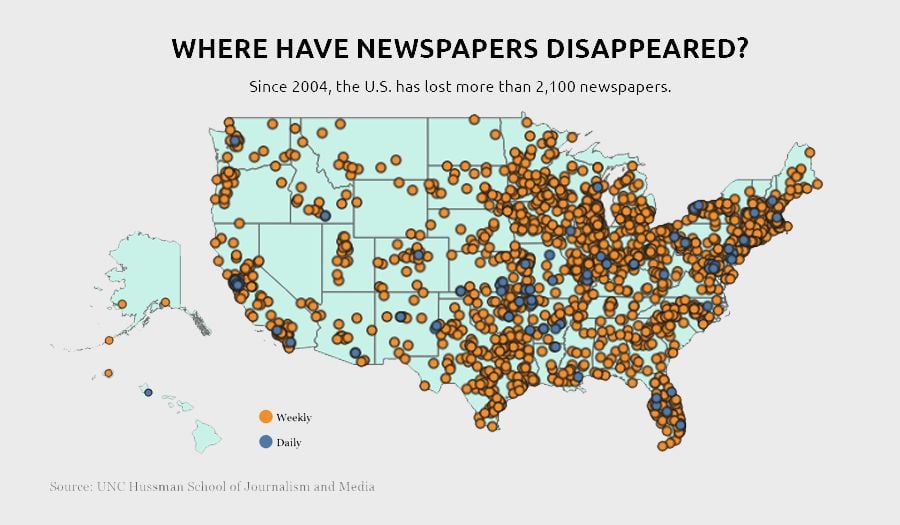 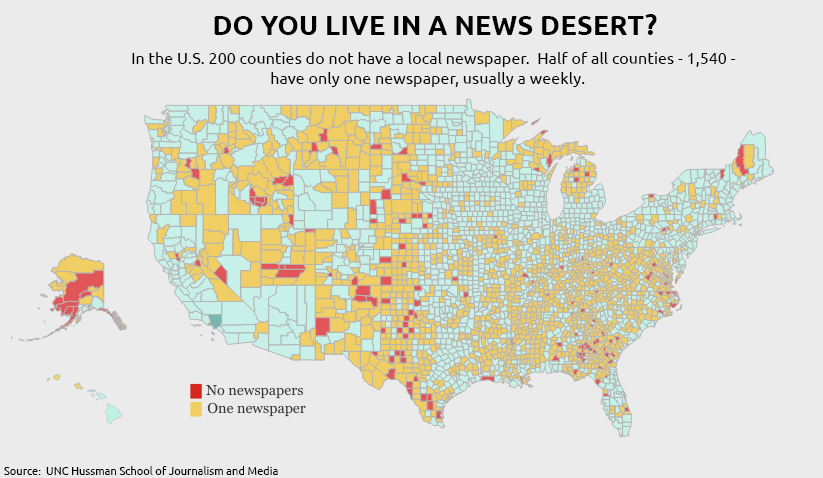 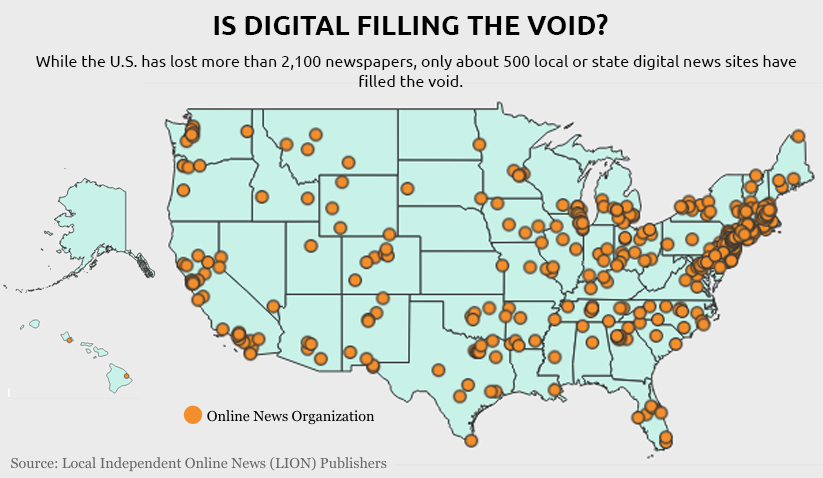 A quarter of all U.S. newspapers have died in 15 years, a new UNC news deserts study found

The relentless spread of news deserts was speeding up even before the coronavirus incapacitated local economies, and since then the rate has accelerated some more.

At the same time, the digital news cavalry long and widely expected to come riding to the rescue of community journalism has decelerated to a surprising halt.

These are the main findings of “News Deserts and Ghost Newspapers: Will Local News Survive?,” a new report published Wednesday by Penelope Muse Abernathy and her research program at the Hussman School of Journalism and Media at the University of North Carolina at Chapel Hill.

The 124-page report, the most extensive of four from Abernathy’s team since 2014, explores the news landscape from several perspectives. It draws from 15 years of data it has assembled that track newspapers, community digital news sites and — new this year — 950 ethnic media and 1,400 public broadcasting stations. The data is interactive through the program’s website, which also offers 350 interactive maps.

The report not only measures the present against the past but also looks to the future. It explores some hopeful possibilities — “I don’t like being Dr. Death,” Abernathy said in an interview — but does not shy away from the unpleasant.

“The coronavirus pandemic,” the report says, “has reminded us, yet again, of the vital importance of local news. … Yet, at this very moment, local news organizations, large and small, for-profit and nonprofit, are confronting a dire economic threat to their existence.”

Dozens of newspapers have closed, the report adds, and there is “the threat of dozens — even hundreds — more before year’s end.”

The coronavirus cataclysm has rattled publishers and observers from many perspectives.

The Harvard Business Review veered into the world of news to publish an essay entitled Journalism’s Market Failure Is a Crisis for Democracy.

And among the hundreds of announcements of closings, mergers and cutbacks at newspapers, was this eye-popping news:

A chain that published 14 weeklies in affluent Chicago suburbs, 22nd Century Media, threw in the towel. How affluent? The U.S. median household income is $63,179; the median across the communities the chain served is almost double that — and Winnetka’s, the highest, is $216,875. “Advertising and revenue collection just stopped,” the chain’s publisher told The Chicago Tribune.

If it’s not possible to publish weekly newspapers in communities like this, where could it be?

Another place that doesn’t work well for publishers, the report says, is Montgomery County, Maryland, the 17th wealthiest county out of 3,144 in the United States, with a median household income of $99,763. Well before the coronavirus, it had lost almost all its newspapers.

22nd Century’s demise is noted in a single line among nearly 200 entries in the burgeoning list that Poynter’s Kristen Hare has been compiling on the Poynter website since the pandemic descended — papers that have closed or merged, cut newsroom and/or executive pay, reduced working hours, reduced days of print publication, stopped print entirely to become all-digital, furloughed people or eliminated jobs, gone on hiatus, or closed buildings or newsrooms.

Between 2004 and 2018, Abernathy said of the data her team has collected and analyzed, the newspaper death rate varied from year to year but averaged 10 a month, with a particular spike after the 2008 Great Recession. Then, in 2019, the rate jumped to 20 a month. And since the pandemic arrived the rate has jumped again, to 30 a month, said Abernathy, UNC’s Knight Chair in Journalism and Digital Media Economics.

“Industry analysts,” the report’s section on newspaper chain ownership concludes, “are predicting that a prolonged and deep recession resulting from the coronavirus could lead to the closure of hundreds of newspapers and, potentially, the bankruptcy of the chains that are highly leveraged.”

In the fall of 2018 the UNC researchers counted 525 digital news sites at the community level, some of them for-profit businesses and some nonprofits. The good news is that more than 80 new community sites have been launched since then, according to the report, and the bad news is that the same number went dark over the same period. Today’s count: 525, a net gain of zero.

“Many of the early local news sites established between 2008 and 2012 envisioned a business model that relied primarily on digital revenue from local business,” the report says. “However, as prospects of garnering enough revenue from digital advertising have diminished in recent years, many websites, even for-profit ones, are increasingly looking to the nonprofit world to supply those funds.”

And, the report asserts, “there is a critical need for more funding that would encourage the expansion of these enterprises into regions that lack a local news organization.”

One of the glimmers of hope in the 2020 news landscape is that INN, the Institute for Nonprofit News, has been getting fresh inquiries from prospective new sites since the pandemic landed.

Sue Cross, INN’s executive director, said in an interview that the same thing happened after the Great Recession struck in 2008: Reporters who’d lost jobs start exploring new possibilities, and this led to a wave of startups. Now loads of reporters are again losing jobs, and many are again making inquiries about what it would take to start a nonprofit site.

Further, Cross said, INN has started getting queries about how nonprofit sites work from community foundations and civic leaders alarmed by how hollowed out the legacy newspapers in their cities have become.

That said, she added that 60% of her members think the pandemic won’t interfere with their funding, but the other 40% are not so positive.

Chris Krewson, executive director of a trade group focused on for-profit news sites called LION, or Local Independent Online News Publishers, said only one of LION’s members had shut down since the pandemic arrived. But, he added, “I don’t want to paint a rosy picture. Those that have business models that are overreliant on retail advertising are struggling. Lots more publishers are experimenting with reader revenue.”

Looking to the future

We are living in a watershed year, the report says, and making choices now that will determine the future of the local news landscape.

The report includes 35 pages that explore possible paths to a strong future for local news, including:

The coronavirus crisis has for the first time set Congress to exploring ways to support local journalism, as well as other forms of local business.

Some journalism thinkers have been advocating government support for years with little response. Now five bills that address this are getting attention in Congress, and topics being explored include Small Business Administration loans, directing more government public service ads to local sites, pension debt relief, and tax credits for newsroom employment.

As our fragile industry moves forward in this fragile time, the report asks:

“Will our actions — or inactions — lead to an ‘extinction-level event’ of local newspapers and other struggling news outlets, as predicted by some in the profession? Or will they lead to a reset: an acknowledgment of what is at stake if we lose local news, as well as a recommitment to the civic mission of journalism and a determination to support its renewal?”

Tom Stites is a consulting editor for the International Consortium of Investigative Journalists as well as the founder and president of the Banyan Project, which is pioneering a cooperative model for community journalism.